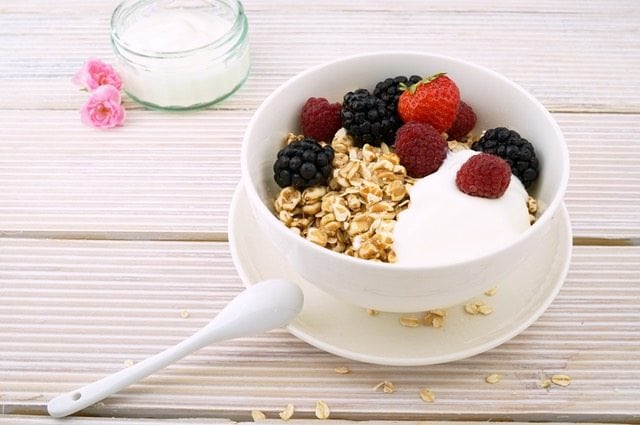 Mmm – haven’t we always been told to eat breakfast, come rain or shine?  In fact, I’ve been one of the guilty myself – suggesting to clients that if they don’t include this daily habit, they may find their metabolisms negatively affected.  But rather a lot of very interesting research has suggested that we can gain huge benefits from going without food for brief-to-prolonged periods of time (14-36 hours) – called intermittent fasting.

Going without food regularly would have naturally occurred back in the days when we had to hunt for, or gather, our own food.  It’s highly unlikely that we ate first thing in the morning, since we didn’t have larders full of food!  Instead, we probably ate later in the day once we’d found our food and so instinctively exercised in a fasting state.  In fact, later on in history, during Roman times, a meal was eaten once daily, at lunchtime.  It was during the time of the industrial revolution that we began eating smaller, more frequent meals.

We subsequently became conditioned to eating breakfast (formerly the meal that simply ‘broke the fast’ of overnight sleeping)early in the morning, which – in an insulin-sensitive person (i.e. lean and healthy person) – has the potential to play havoc with our blood sugar because it tends to occur at the same time our cortisol levels naturally rise.

You may not know this but the liver is an enormous warehouse for fuel in the body. In order to take full advantage of your body’s fat-burning abilities, you’ll want to give your liver time to empty itself fully of glycogen (liver ‘sugar’), before putting your next meal in.  It takes approximately 10 hours for this to happen, and it’ll leave both the muscle cells and the liver cells devoid of fuel.  This allows the body to tap into body fat stores, using the excess fat as fuel.

Now add exercise on top of that empty liver and you’re going to be able to maximise the impact of certain cellular factors and catalysts that force the breakdown of fat and glycogen for energy, forcing your body to burn fat without sacrificing muscle mass.

When you combine fasting with hunger, it boosts the production of growth hormones, increasing their ability to burn fat and repair tissues. So, why not burn fat while fasting and boost your metabolism while eating?

Benefit to the brain and hormonal system

It appears that challenging the brain regularly with temporary hunger results in a reduction in the number of hunger hormone receptors in the brain, causing better efficiency in the satiety hormones. This, in turn means that you will get fuller more quickly when eating (less hunger receptor sites vs more satiety receptor sites) and so will naturally eat less at meals.  This results in natural calorie restriction which we know, through scientific experiments, leads to increased longevity.

Just be aware that the same genes that promote human longevity also suppress female reproductive capacity. This means that fasting and intense exercise protocols, both known to promote longevity, also lower estrogen levels, improving body composition in women but suppressing female reproductive capacity (so don’t combine long periods of intermittent fasting with intense exercise if you want to have kids).

The formula for increased wellness and fat loss

Don’t partake in intermittent fasting if pregnant, breastfeeding, hypoglycaemic, diabetic, under chronic stress or if you have a cortisol dysfunction.

I personally experimented with intermittent fasting (IF) to see just how effective it would be.  Late last year I committed myself to 16-hour fasts (i.e. skipping breakfast) most mornings and then performed exercise in a fasted state.  I had my body fat, weight and girth measurements taken at regular intervals to record the changes and I kept a food and training diary at the same time.

Now, bear in mind that the more body fat one has to lose, the faster the loss will occur, whereas in a person starting with low body fat (mine started at 19%, which is relatively low), this loss will be much slower. Here are the results of the two-month experiment :

2021 Update: After writing my third book (last year) and focusing on females only, I have extensively researched IF protocols for females, which is very complex, and different to that for men. I cover the benefits and methods in this video (aimed at men), but please contact me on if you are female and wanting to practice IF.